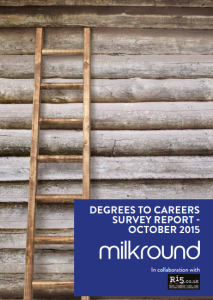 Today, we revealed the results of our latest research piece partnered with Ri5 an Insight Breakfast. We offered employers, agencies and universities an insight into candidate expectations when setting out on their subject-related career dreams, to the harsh reality of what it takes to succeed ‘From Degree to Career’.

The survey asked 2,500 of our graduates who left university in 2014 or 2015 for their career paths when they graduated from university together with the internship opportunities that were available to them and the skills students are (or are not) gaining at university.

With just 11 per cent of those who completed an internship in law being offered a returning role in the business, it’s clear that with such stiff competition for graduate positions, alternate sectors must remain a realistic solution to entering full-time employment upon graduation.

In contrast, 61 per cent of savvy Engineering students who completed an internship (52 per cent) did so in an alternative industry to their chosen course subject – keeping their options open.

The report also looked at the number of graduates who were turning down job offers, and the reasons why. Out of all the respondents, 28 per cent were offered more than one job and had to decline some offers. Nearly 10 per cent of these had turned down four or more opportunities. Most claimed that it wasn’t the right role for them, but a lot of respondents commented that the location of the role played a part in their decision.

Two in five students (42 per cent) have revealed that upon graduating from university, they choose their careers for money.

With 8 per cent of the UK’s reluctant graduates opting for roles in Retail, Buying & Merchandising, and 6 per cent securing a role in Sales over their desired career paths, perhaps the opportunities for commission is too tough to resist.

Francesca Hall, Senior Marketing Manager at Milkround comments: “With a rising trend of candidates seemingly holding all the cards when it comes to selecting a career; 42 per cent of our audience having turned down at least one graduate job offer, the pressure is on for employers to ensure their offering is competitive.

“19 per cent of candidates have even declined up to three, four or even five graduate job offers before making their final selection. Employers must be sure to keep their future talent engaged, or be at risk of losing them to a proactive competitor.”

The full Degrees to Careers report is published and hosted exclusively here.

This site uses Akismet to reduce spam. Learn how your comment data is processed.